My ambition since first being elected has been to work hard to improve all aspects of our professional and personal lives in Galway East.

Clearly, employment, health, education, housing, communications, transport and agriculture are top priorities for all of us but I have also been mindful of those aspects of life which enrich us personally, such as culture, sport and recreation.

I am delighted to have assisted in many projects right across the constituency over the last three years as both a TD and Minister.

Job creation and economic development is crucial to Rural Ireland. To that end we have seen some major investments and employment dividends, particularly at Valeo (€44 million investment, creating 50 jobs) and Steeltech (€5 million investment, creating 43 jobs), both in Tuam; Natus Gort (75 jobs); and Glan Agua (60 jobs), Loughrea and Chanelle (350 jobs), Loughrea. Working with agencies, public bodies and businesses to create more jobs in the constituency is a top priority for me.

I have been actively involved in the new roadmap for Tuam’s national schools, where the three national schools will be amalgamated into one state of the art 32-classroom school with a separate building for Educate Together.

Over the past three years, we have seen the opening of the €20 million new Presentation College, Athenry, the new Archbishop McHale College building in Tuam, Tuam Gaelscoil and Cahergal NS, while the construction of Clarin College, Athenry, will be completed by the end of 2019.

I am also delighted that the €4.3 million build for St Oliver’s Special School, Tuam is under way.

More than €40 million has been spent on the Tuam Health Campus and we are continuing to add more facilities, such as the Community Nursing Unit and the X-ray service. I have been lobbying hard for the new 50-bed unit at Portiuncula, Ballinasloe, which is urgently needed both in its own right but also to take pressure off University Hospital Galway’s A and E unit.
I am very pleased that the refurbishment of the old Grove Hospital into a facility for Mental Health, Early Intervention and Disability Services by the HSE is on track. I am continuing to press the HSE for the introduction of X-Ray services in Tuam for which €700,000 in funding has been made available.

The CLÁR Programme which is run by my Department to assist rural areas of population decline has assisted many health projects, including providing €100,000 for a 25-seater bus for Cancer Care West, more than €68,000 towards the purchase of an accessible vehicle for the Irish Wheelchair Association in Tuam and €50,000 for a vehicle for the Galway Hospice.
As Minister for Rural and Community Development, I approved funding of €30,719 for Galway Autism Partnership to provide support and training for families and carers.

The last two funding rounds from the Rural Regeneration Fund run by my Department have seen a total of €8.3 million awarded to County Galway.
Major projects to benefit have included: The Athenry Bia Innovator Project (€3.5 million) to establishment the town as a food and tourist centre, including upgrading work for the town centre; design funding of €525,000 allocated to Galway County Council for street widening works at Bridge Street, Dunmore and €175,000 to develop the master plan for Tuam Town Centre. The Tuam project will set out the future use for the Town Hall, the railway station site, the old fire station site and the Town Centre. Also in Tuam we have this year seen the opening of the new fire station, plans are advanced to bring the Old Library back into use as an Intreo centre and the Department of Justice has included Tuam Courthouse in its national refurbishment plans.
Other projects to benefit under the Rural Regeneration Fund include Derrycrag Nature Trail at Woodford, which received €80,000 under the allocation to the National Parks and Wildlife Service.
Tuam and Ballinasloe also qualify for funding under the Urban Regeneration Fund, which offers the towns a unique opportunity to maximise support for development plans and initiatives.

I continue to press nationally for measures to bring vacant houses back into use. Locally, I am pleased that Galway County Council and Galway’s City Council’s Housing Task Force has been set up and that the construction at Gilmartin Road in Tuam to provide 61 modern homes is progressing.

Key infrastructural projects like the opening of the M17 from Athenry to Tuam have had a transformative effect for the whole of Galway East, making personal, business and tourism travel more efficient and accessible.
This year County Galway received €29 million from the Department of Transport for regional and local roads, up €6 million on the previous year, while the County also received €2.5 million from Transport Infrastructure Ireland (TII) for local projects. My department, the Department of Rural and Community Development granted nearly €856,959 in 2019 under the Local Improvement Scheme for roads that are not under the County Council’s jurisdiction, up 24% on the previous year.
Road schemes funded by the Department of Transport have included:
€420,000 for the Dunkellin River Bridge
€400,000 for bridge rehabilitation work, including Bolagh Bridge, Woodford
€546,000 for Community Involvement Schemes
€15,000 for design work for the Athenry Relief Road
€1,380,000 for road drainage works in 2019, double the previous year’s allocation

Road schemes funded by the TII in 2019 include Milltown to Carrownurlar, Claregalway traffic calming, Abbeyknockmoy to Annagh Hill, Ballinderreen to Kinvara, Kilmeen to Kinvara and the R332 at Kilbannon.

The independent review of the Western Rail Corridor extension to Claremorris from Athenry via Tuam is under way. I believe this is a vital piece of infrastructure for commuters, freight and tourism. It is important for the development of our transport infrastructure along the Atlantic Economic Corridor. Passenger numbers along the existing route have been increasing sharply, which demonstrates the future potential of growing the rail network.

To find out more about the vision for the Atlantic Economic Corridor and what it has achieved click here. (This will take us to the area on the website for the AEC).

Flood relief schemes were under my remit as Minister in the Office of Public Works. This allowed me to drive forward much-needed works in the constituency and I have remained deeply involved in the projects to ensure they progress without delay. These include schemes for Portumna, Dunkellin, Kiltiernan, Ballinasloe, Claregalway, Loughrea, Athenry, Ahascragh, Derryoober, Gortaha, Woodford and Rafarn. Gort Lowlands scheme is now at the full design stage.

Galway County Council has received more than €2.5 million for various flood relief projects under the Minor Works Scheme across the county and constituency since 2016.

Irish Water has signed the contract for the €13.8 million extension to the Tuam Regional Water Supply to Loughrea. I am also delighted that after many years of campaigning the design for Kilrickle’ supply has been finalised. When completed clean, fresh water will finally be supplied to houses in Kilrickle and Kilcooley.
Galway’s water schemes secured €260,000 under the Rural Water programme in 2018.

Athenry Waste Treatment Plant opened in July 2019 and the project will continue to phase two of the pipework. When completed in 2020, it will enable many housing estates to be connected to the municipal sewerage scheme.

I continue to support the interests of all our farmers and I was pleased at the recent supports offered by Government. With Brexit and its effects, there is much still to do but I welcome the €100 million scheme to support beef farmers and the additional €57 million allocated in Budget 2019 to help low income farmers.
I fully recognise the support that farmers are giving to Climate Action and I deplore any attempts to scapegoat farmers for climate change. The Dairy Farm Grant is important for helping farmers transition to more efficient milking systems.
In other measures I was pleased at the restoration of the Areas of Natural Constraint payment, the new payment for weighing calves, the renewal of stock relief measures and the extension of the Young Trained Farmer stamp duty relief.
I have also been calling on the factories to provide proper compensation to farmers whose beef carcasses were excessively trimmed.

The Government decision to go ahead with the National Broadband Plan has my full support.
It is vital to the development of Rural Ireland as we seek to grow our businesses, create jobs, connect our farms and enrich our lives. We will be connecting 1.1 million people in approximately 540,000 homes across Rural Ireland, including 56,000 small and medium-sized businesses and 670 primary schools. People in Rural Ireland must have the same benefits as the rest of the country and that includes High-Speed fibre broadband. We will be investing €152 million in Galway to connect nearly 40,000 homes.

Restoration work and improvements at Portumna Castle were ongoing projects when I was Minister for the Office of Public Works in 2016. Since then we have seen the café and meeting area renovated and opened and I intervened in the sale of the Castle’s Gate Lodge to ensure that it came under State Ownership. The lodge is integral to the castle as a tourist amenity.

The Castle and Marina are central attractions in the promotion of Ireland’s Hidden Heartlands. Other tourism amenities that have been funded under my remit within the Department of Rural and Community Development include Coole Park, Kinvara Boardwalk, Derrycrag Nature Trail, Woodford, the Walks in Loughrea and Knockma Hill near Belclare. I worked very closely with the Minister for Culture, Heritage and the Gaeltacht, Josepha Madigan to secure €3.2 million in funding for the restoration of Meelick Weir.

I have also announced development funding for Geotourism, including a range of County Galway projects, including Glengowla Mines, Connemara, the Joyce Country and Western Lakes Geopark near Clonbur and the Sliabh Aughty Furnace Project.

Projects receiving funding under the Outdoor Recreation Scheme administered by my Department include the Hymany Way, Portumna (€100,000), walking trails for the Cowpark, Coillte and the Brothers of Charity sites in Clarinbridge (€199,000) and Loughrea’s Local Heritage Working Group (€100,000), which received funding for the first phase of the Walks Project.

For Headford, we looking at enhancing the visitor experience at Ross Errilly Friary following a meeting with the Office of Public Works and I am pleased that the OPW’s own building in Headford has receive planning permission to build an extension of new offices.

These funds, which are administered by my Department, the Department for Rural and Community Development, have provided a whole range of supports for rural communities within the constituency, in particular sports organisations, youth clubs, childcare facilities and social projects, like Men’s Sheds.
I continue to encourage and support all organisations in their quest for funding to develop and improve their communities. 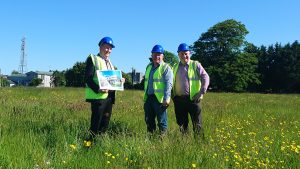 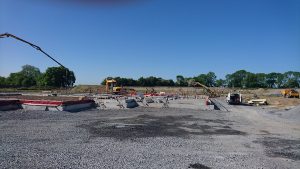