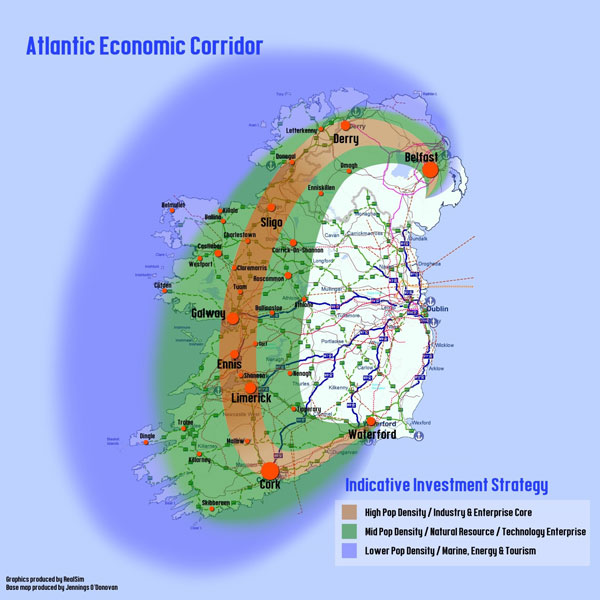 I am chairperson of the Atlantic Economic Corridor Task Force. The AEC is a wonderful initiative by a number of Chambers of Commerce and business organisations across the West of Ireland. The founding members include the chambers of commerce of Limerick, Shannon, Ennis, Galway, Roscommon, Mayo, Sligo, plus the American Chamber of Commerce.

Collectively, the chambers and business organisations represent 73,500 employees, in 2,250 Irish-owned and multinational firms in the mid-west, west and north-west of Ireland.

The AEC passes directly through the Galway East towns of Gort, Athenry and Tuam. However, it is also adjacent to Loughrea. Thus, the AEC corridor presents great opportunity not only for those towns. But also the outlying towns and villages close to the corridor. In addition, the new M17 motorway will provide for easy access through the corridor.

The overall mission of the initiative is an Atlantic Economic Corridor, with a ‘city of scale’ from Limerick through Galway to Sligo. As a result, it will match Dublin and Cork in success in developing infrastructure, attracting Irish and multinational investment. Together with growing jobs and wealth in vibrant communities.

Additionally, the vision of the AEC is to realise the massive hidden, untapped, present opportunity to bring jobs and investment. In reality it will develop a city of scale’ in the Atlantic Economic Corridor.

The collective objectives of the Atlantic Economic Corridor are to :

Finally, please download the AEC Strategy Booklet (Feb 2016) to get a better overview of the Regional Economic Strategy.