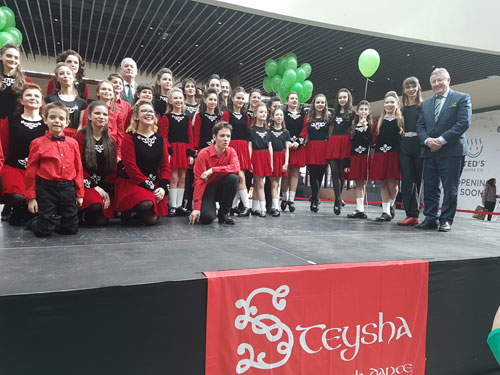 Delighted to be speaking at the Romania Ireland Business Association ball in Bucharest last night.
It was the first time in ten years that an Irish Minister had visited Romania over the St Patrick’s weekend.
The Taoiseach also visited Bucharest last July for the first ever official visit by a Taioseach to the country.
Our increasing contacts are a sign of our strengthening ties with Romania and our commitment to our European Union colleagues.
A couple of years ago Ireland appointed a Commercial Attaché to Romania to promote trade and this June my colleague Minister for Business, Trade and Employment Pat Breen TD will lead Ireland’s first full trade mission to Romania.
The event was hosted by Ireland’s Ambassador to Romania Derek Feeley.

Also a busy day in Bucharest during the day. Had meetings with Alexandru Petrescu, Minister of Communications and Information Society and Alexandru-Velntin, Secretary of State at the Ministry of Agriculture and Rural Development. Then I had the pleasure of introducing a performance by the “STEYSha” Irish Dancing School at Park Lake Mall. STEYSha is a Romanian project that pays tribute to Irish culture, working closely with the Irish Embassy and the Romanian Irish Business Association, RIBA. I later met with the Board of RIBA, who also hosted the ball I attended last night.